Journey to the New World

In 1816, the first and only government planned immigration scheme brought 134 individuals from Scotland to New Brunswick. The NB Government, concerned about the state of immigration to the province, voted £1000 towards this end. Officials need not have worried, for New Brunswick would soon become a destination for a large number of British immigrants, the Scots being among the earliest to arrive in this province.

Fredericton merchant, James Taylor, used that £1000 to secure a ship, named The Favourite, and hire its captain. The Favourite arrived in Clyde in November 1816, and free passage was offered to unmarried persons. This did not deter the 15 families who boarded The Favourite, bound for a new life in the New World. The vast majority of the passengers, though, were single. Among them was John Mann, an adventurous 18 year old young man from Kenmore (Tayside), Scotland. Modestly educated, John Mann would write about his experience as an immigrant, publishing two separate volumes on the subject in 1824. These works, which offered advice to potential immigrants and published in Scotland, were entitled Travels in North America and The Emigrant’s Instructor.

In his first book, Travels in North America, John Mann gave an account of the boarding procedures, including the search for stowaways. Clever hiding places, including being rolled in the fore-topsail, were identified and the illegal passengers ejected. However, Mann reported that a few returned at nightfall, but unfortunately the number and identity of these stowaways are not known. Importantly, though, John Mann provided a brief but vivid description of his voyage aboard The Favourite. He wrote:

We were allowed porridge and molasses for breakfast. The Captain, well knowing the effects of the latter, supplied us the first day with double the quantity of our allowance. We being ignorant of its tendency and operation, drank heartily of it. One of the passengers who had been at sea before, said, ‘You will curse the molasses yet.’ Towards the middle of the day the wind began to blow hard, the vessel to be tossed, and the molasses, heavy upon the stomach, began to operate...This breeze continued three days, during which time we took little or nothing of the provision belonging to the ship; and as for the molasses, we tasted no more of it during the passage.

John Mann’s first impression of New Brunswick was a negative one indeed. After landing at Saint John, Mann boarded another vessel bound for St. Andrews. He then moved on to the River Maguagdavic and what he saw there dismayed him. He complained: “I was shocked at the dismal and wretched appearance of the country. ...one could certainly conclude that this to be a most excellent place for banishment.”

He would return briefly to Scotland, but found that the grass was not in fact greener. John Mann re-immigrated to New Brunswick in 1828 with his wife, Margaret, spending the remainder of his days in St. George Parish, Charlotte County. He would become friends with fellow countryman, James Brown, who had settled in the neighbouring parish of St. David. James Brown made a number of references to John Mann in his diary, and correspondence between the two was not uncommon. John Mann became rather prominent in his community, achieved prosperity with his farm, and did not again complain about this “detestable cold country.” No other passenger aboard The Favourite left as impressive a paper trail as John Mann, but a few of them appear in databases other than this ship list. 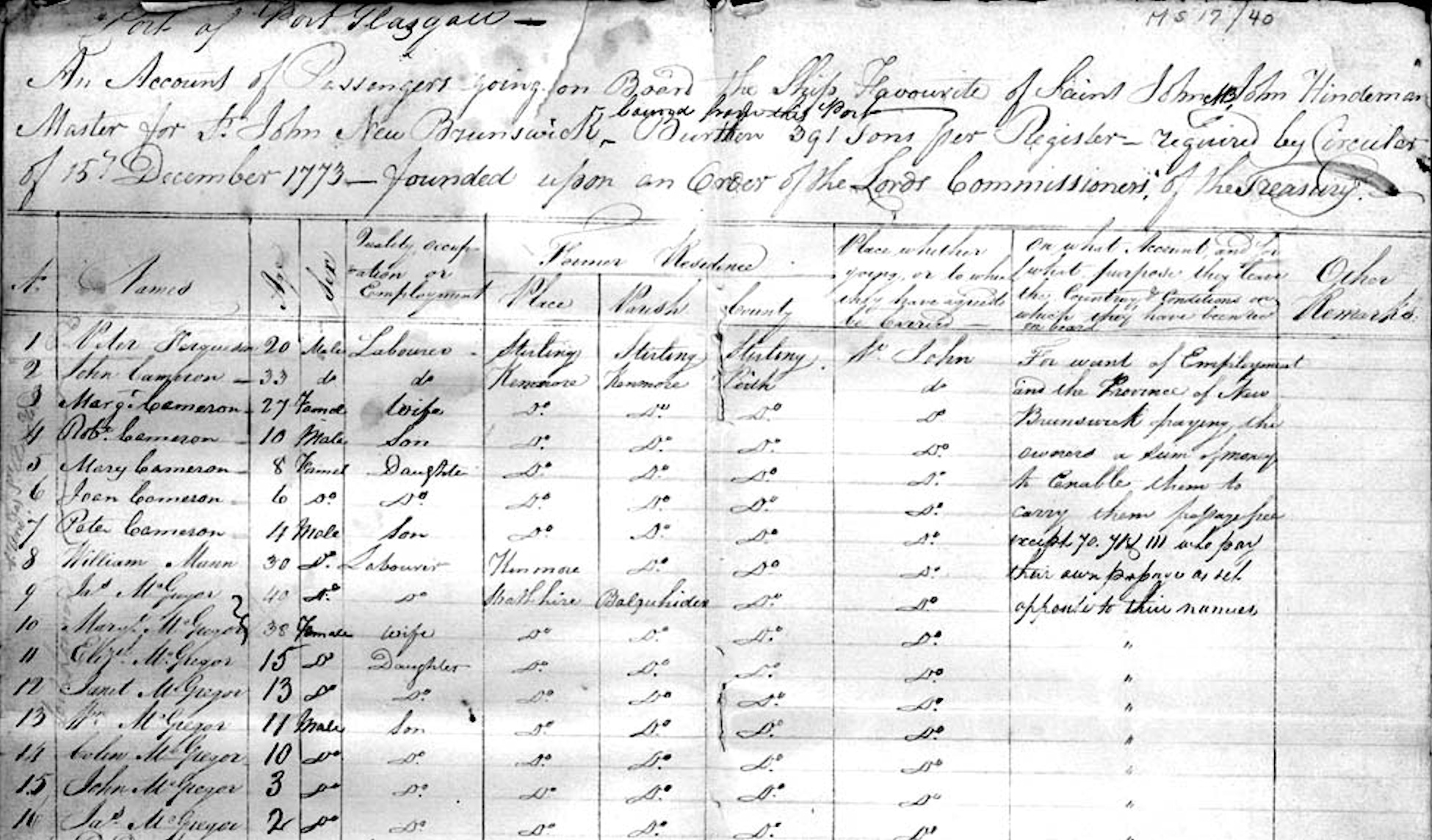